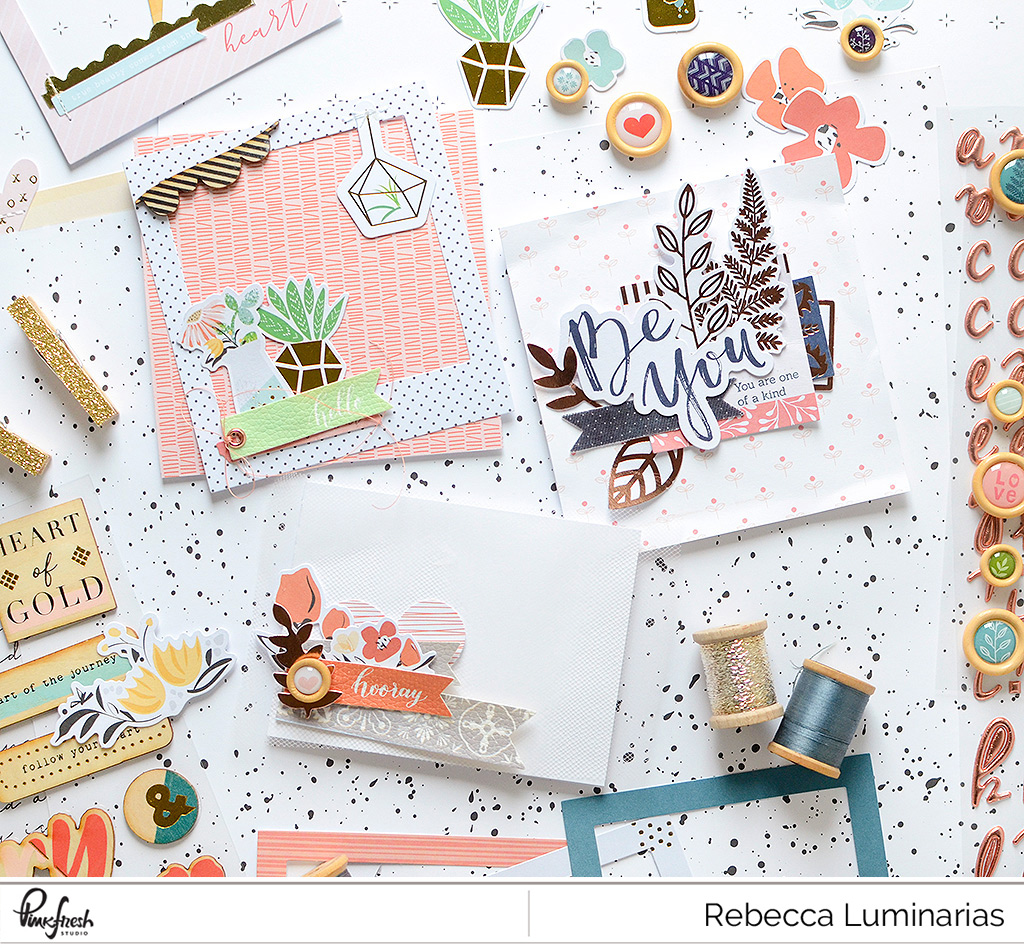 Hey there!  It's Rebecca Luminarias with you, and I have a trio of cards to share.  On each of these cards, I've created a layered cluster of elements and I'll share the details of each one in my post today. 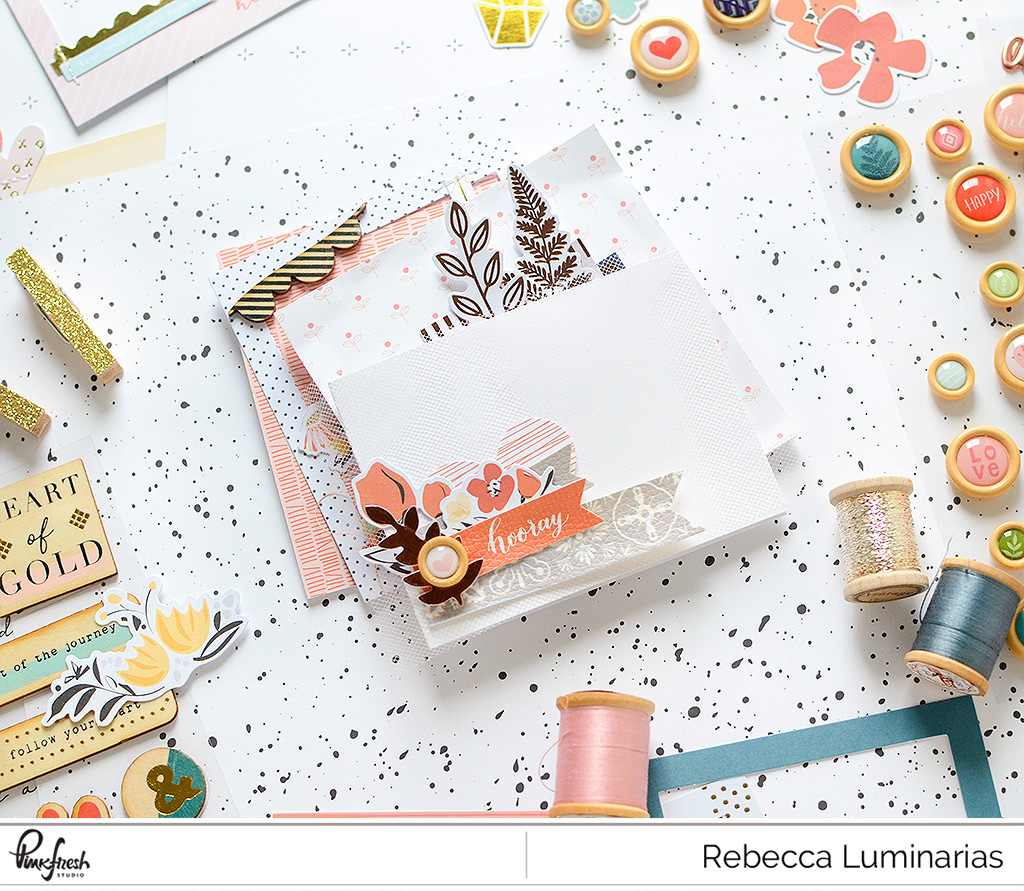 Up first is a mini card, just 3" x 4".  There isn't a ton of space to fill but I've managed to pack a whole bunch of embellishments onto it anyhow.  Using a mix of decorations from the Be You and Let Your Heart Decide ranges, I began with a heart die cut as my bottom layer and built up from there.  I generally stick to a color code or theme when building my cluster.  It's almost like a challenge for me, but it also keeps the cluster from getting out of hand.  I stuck to shades of oranges and grays, with a small splash of pink salmon, which can still look orangey. 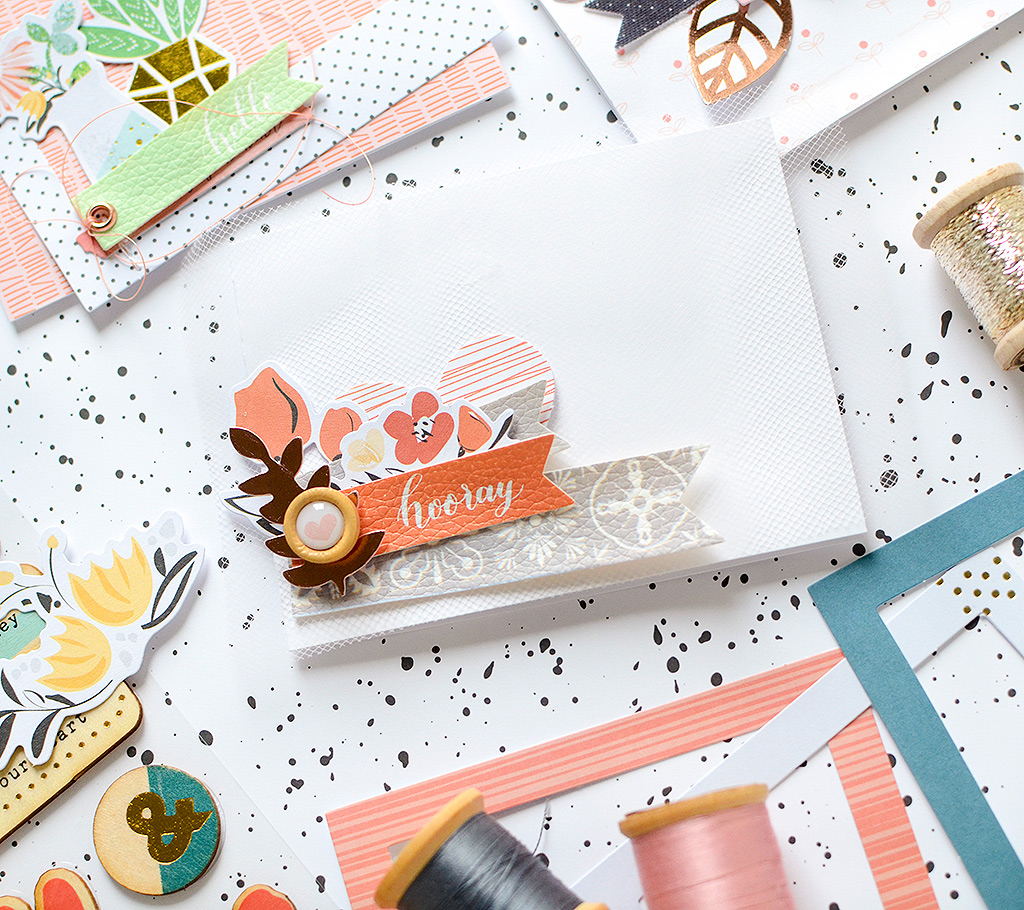 After the heart I added a mix of leatherette tags from Be You, floral die cuts from LYHD, and topped the whole thing off with a rose gold stem and a heart wood button from Be You.  It's all about seeing shapes as puzzle pieces--tall ones in the back, short ones in the front, sometimes tall skinny pieces can sit to the far side while plumper short items can stick up in the middle.  When it's all done, it's meant to look very systematic and purposeful...but it's actually more haphazard and took only a few moments to put it all together. 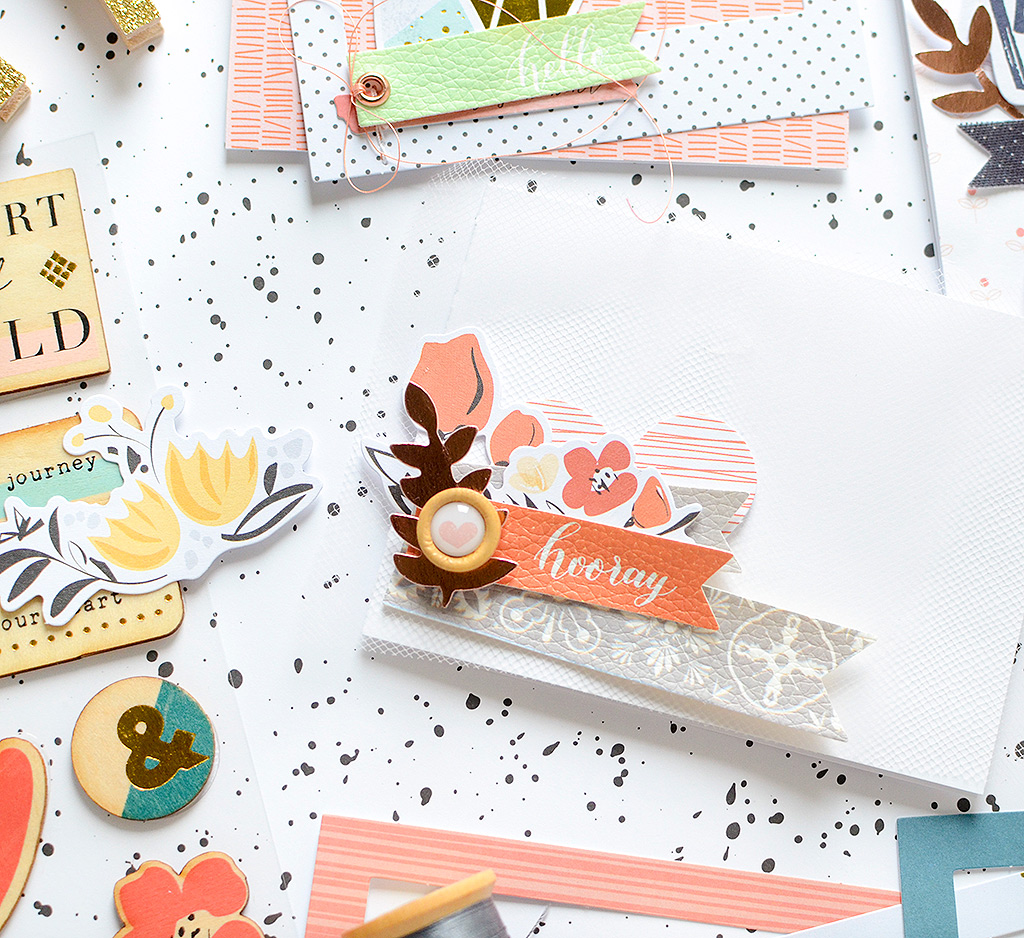 Before I adhered anything in place, I put down a background of pale blush tulle.  This adds very subtle contrast and a delicate pattern to complement the corner cluster.  I adhered the tulle in place by glueing down my bottom-most elements on top of it.  Because the card isn't very big, that's all I really needed to do to keep the tulle from coming off.  And after the last element is adhered, my card is complete and ready to give. 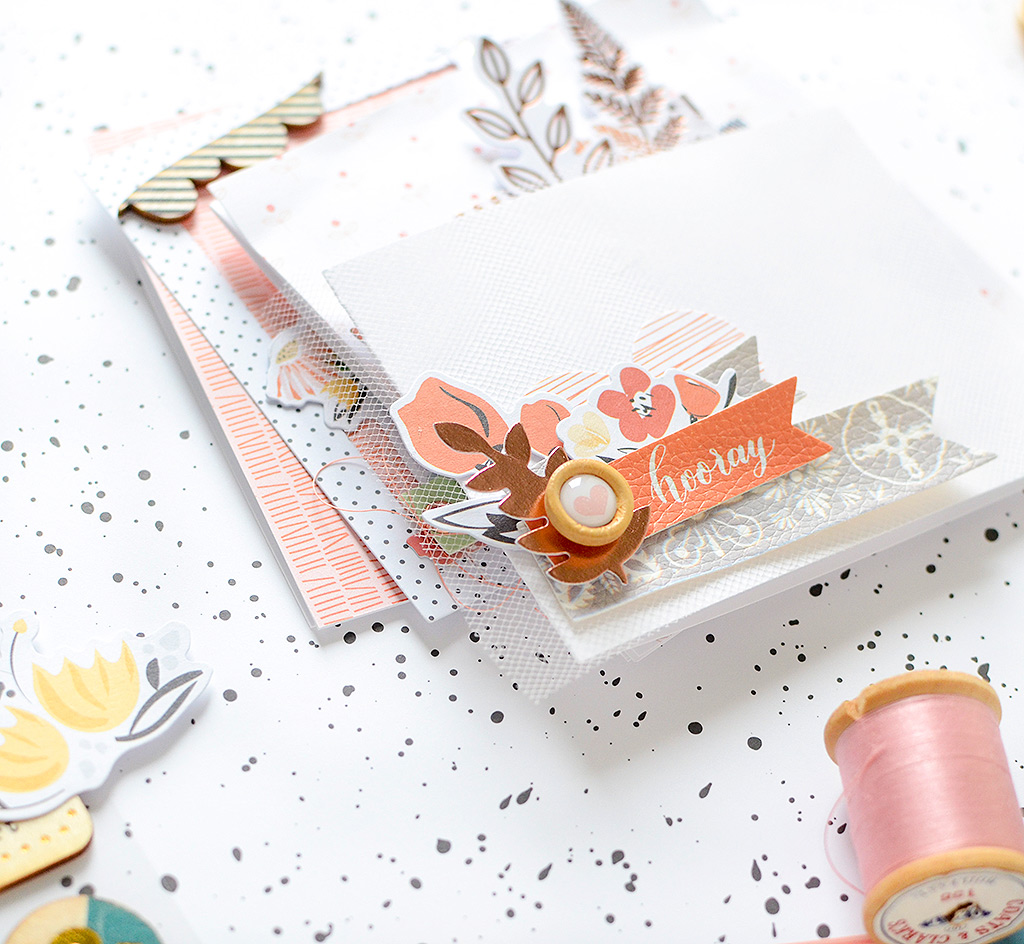 My second card is slightly bigger at 4" x 4" and there's a bit more going on with it, but it keys in on the same idea as the first card: Build on a color scheme and/or theme.  In this case, the colors were navy blue, berry pink, and rose gold while the theme was floral sprigs and being yourself. 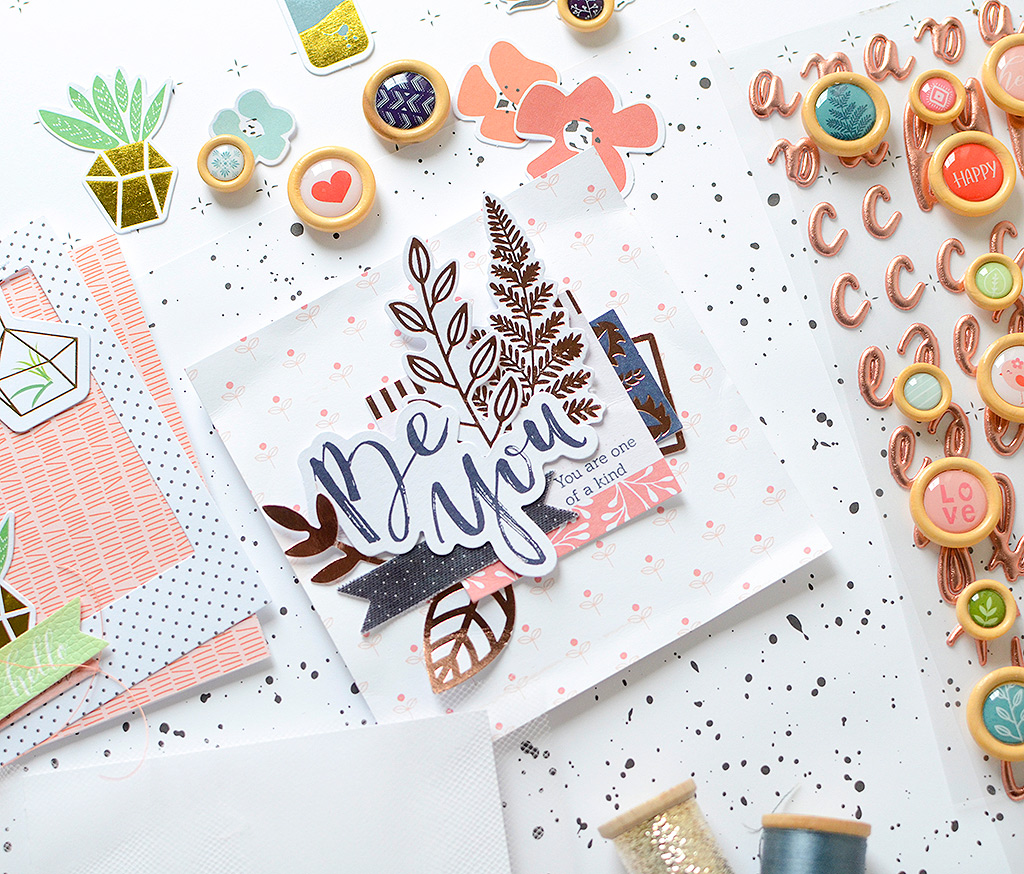 All the elements on this card are from the Be You collection, except for the "you are one of a kind" which is from the Magical Unicorn stamp set.  I folded the background paper up around the edges for added dimension.  I also didn't entirely glue down the whole of my embellishments for the same reason.  I wanted a few 3-dimensional edges instead of a flat-looking card. 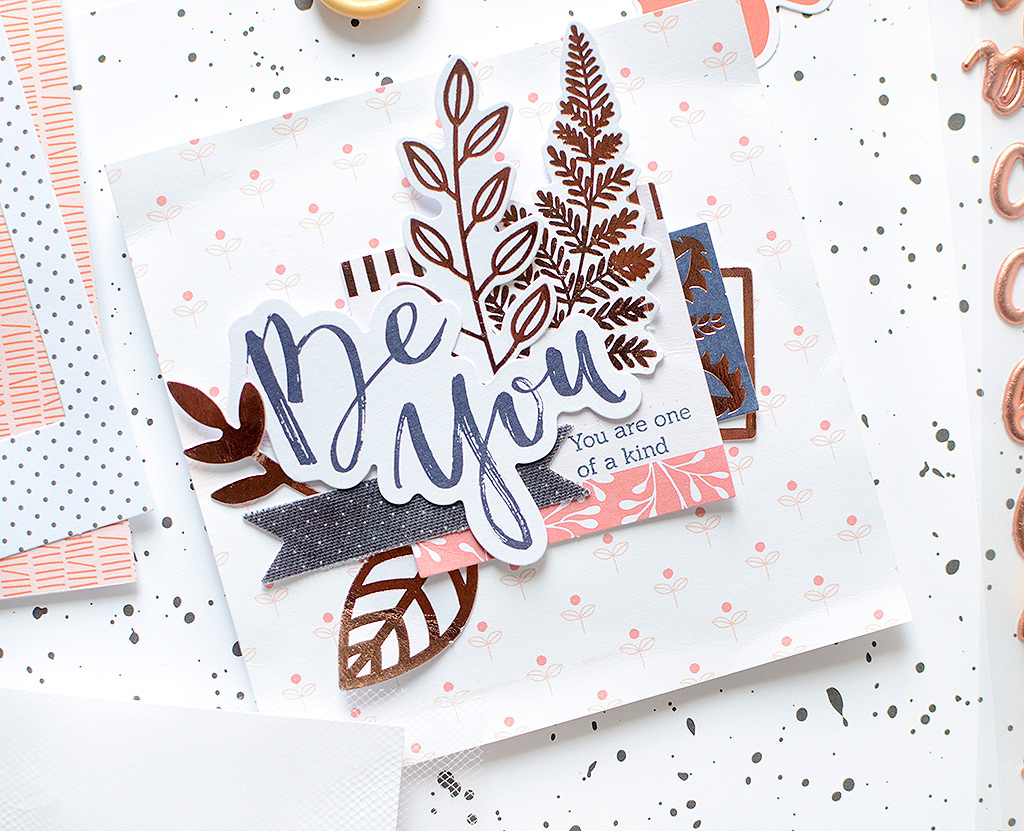 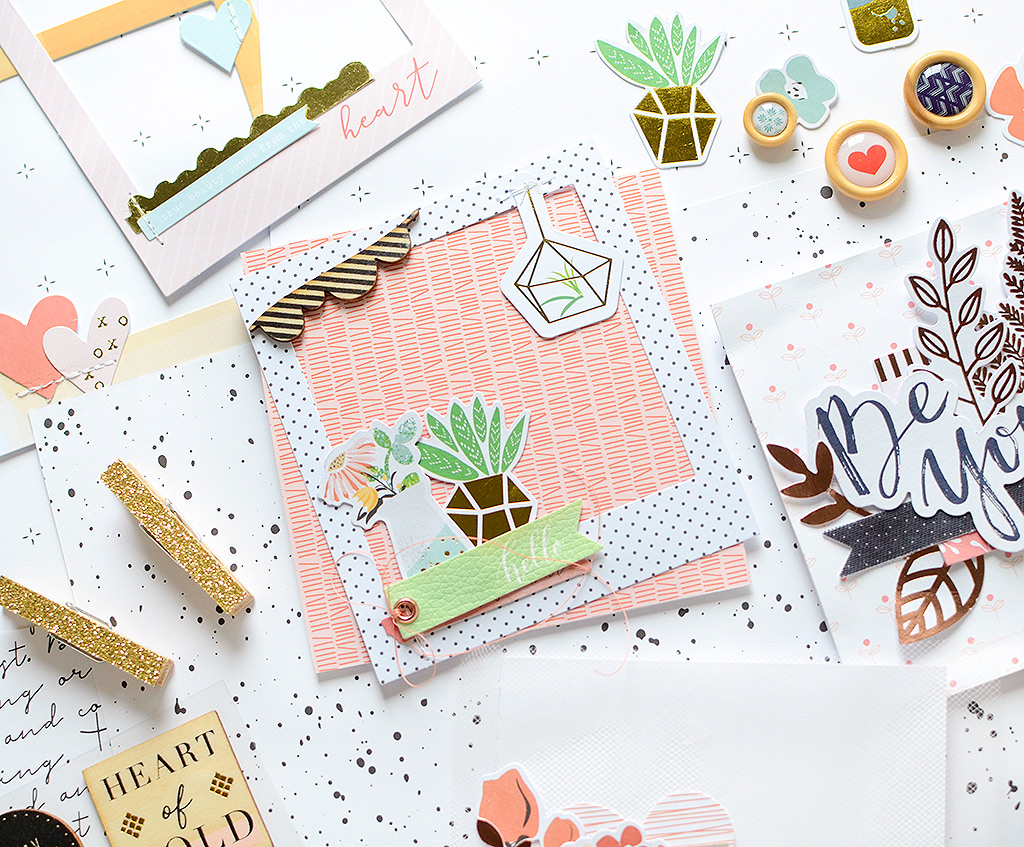 The final card features a very small cluster, but it's a cluster just the same.  Using the LYHD stitched frame as my starting point, I played on the stitched tag in the bottom left corner of the frame.  The sentiment on the tag ('love this moment') wasn't imperative to my card message so I didn't mind covering it up with the mint 'hello' leatherette tag.  I did, however, want to keep a pop of the salmon-colored tag showing so I angled the leatherette tag when I adhered it.  Behind the minty tag I placed 2 floral vase die cuts.  The green succulent ties in with the terrarium in the top corner and the green tag, while the other vase offers extra pops of color in small doses.  The oranges and greens can be seen elsewhere on the card.  The gold dots on the vase mimic the black dots on the frame. 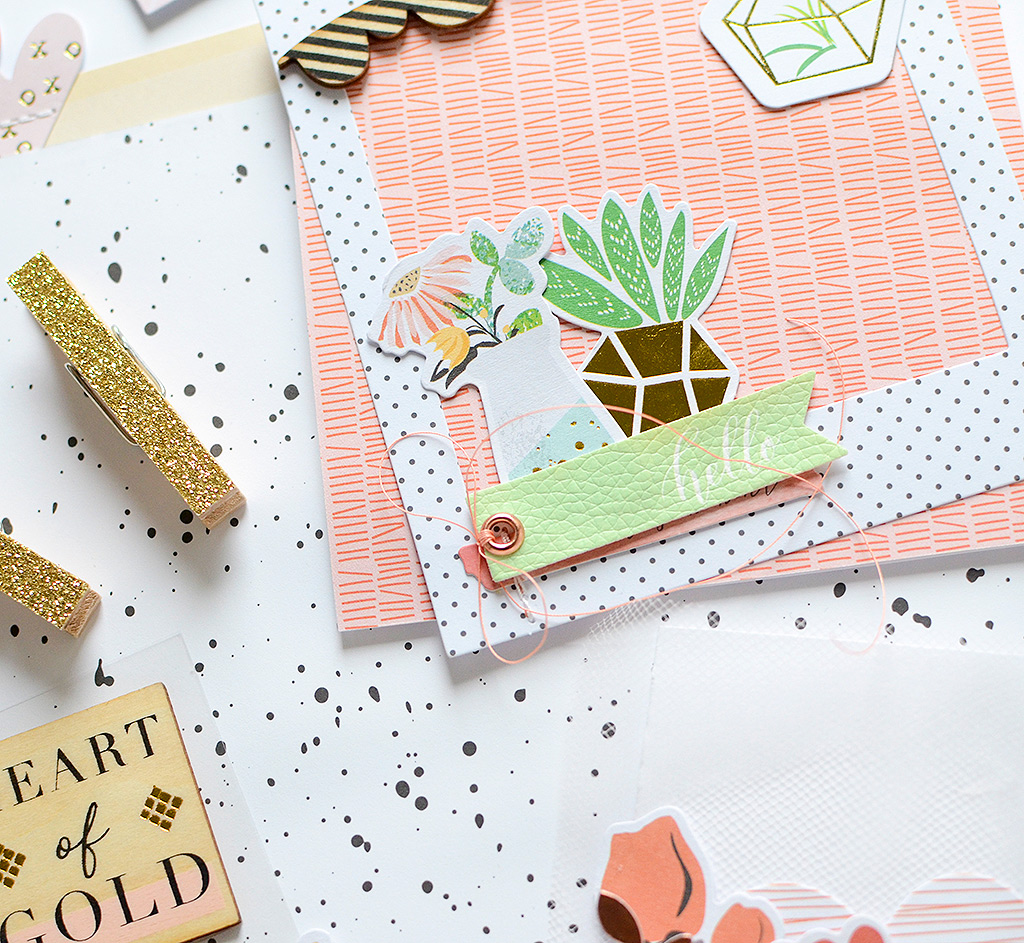 So while this is a minimal cluster, it still has enough elements in it for me to consider it a cluster.  Sometimes I make a big old stack of embellishments, and sometimes there are only a few.  That just goes to show that there isn't really a correct or incorrect way to do this technique.  If it's not something you've tried before, why not give it a shot?  You might just find that you love it!  Have a lovely day! 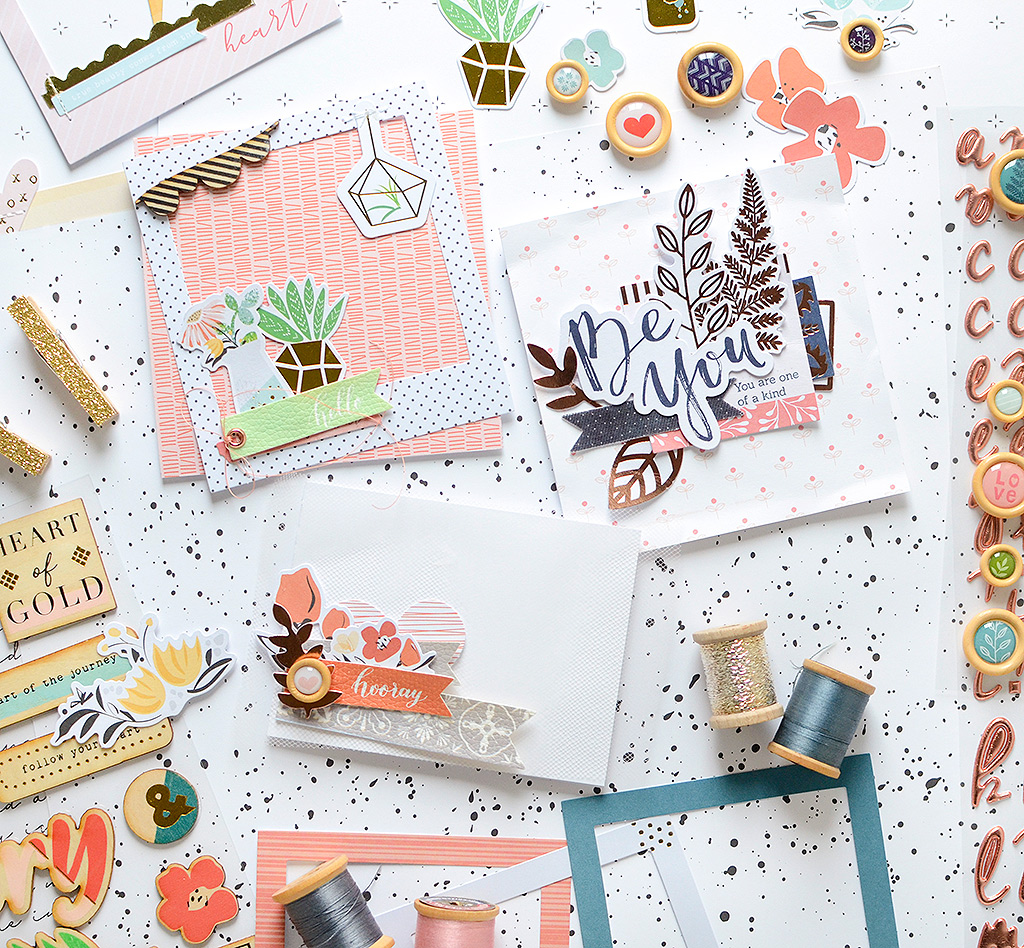 I love the look of your cards! It’s similar to a scrapbook page without the photo – a mini collage. I like how you’ve incorporated color and theme into each cluster and card. You’ve inspired me to try this technique out for myself. Thanks for sharing!

These pretty creations made me smile!

Thanks so much for sharing your cards today! I don’t think I’ve ever made a cluster like that on a card, but now I see how wonderful it looks! And, of course, PF makes it easy with wonderful coordinating collections. I’ll be trying this today!