It's a new year and I'm so happy to be back on the Pinkfresh DT for my second term!  The new collections are amazing and I have no doubt that the rest of the girls are going to be inspiring you (and me!) with every single project they create with them!  We're focusing on Dream On this month and I've got some cards and a fun gift wrap idea for you. 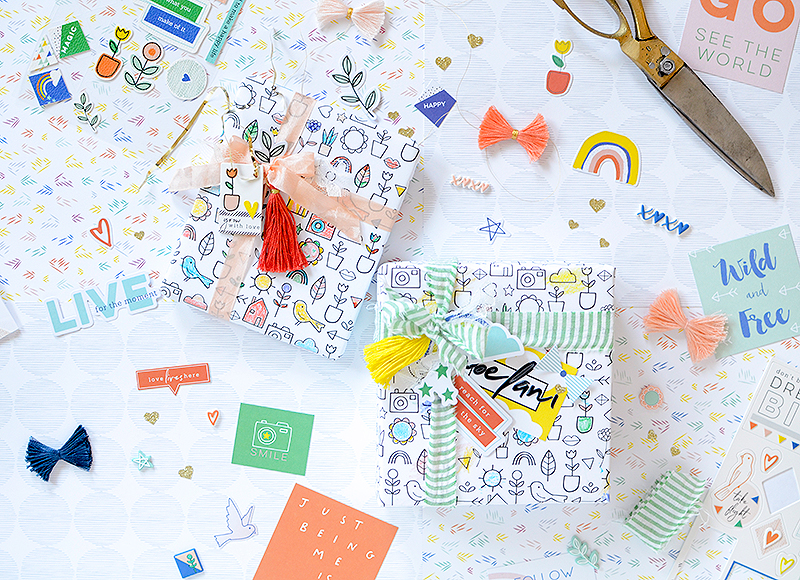 I'm certain that I'm not the only one who thought that the small black and white images on the 'Spring Icons' paper would be really fun to color.  And then I had a lightbulb moment when I decided that I would use the paper to wrap some books for my friend's baby girl.  Since the books are intended to be from my 3 and 6 year old, why not let them showcase their creativity and color in the images? 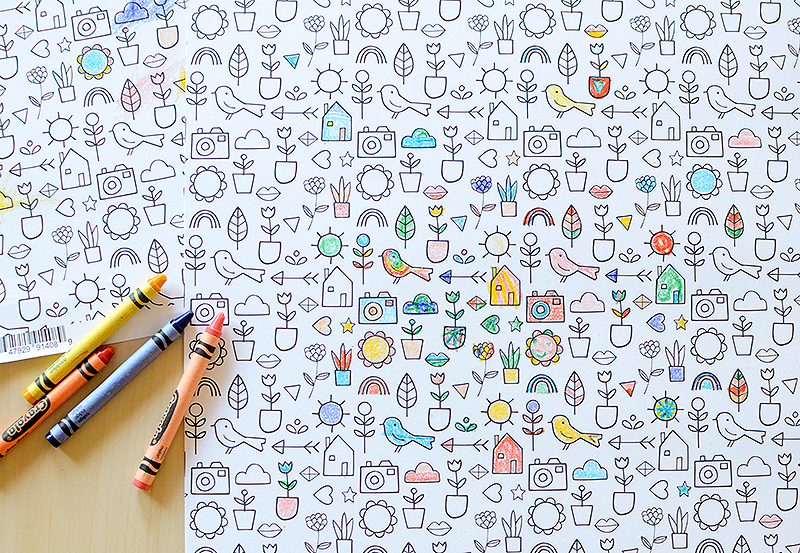 They both loved the idea and it was nice for me, too, letting them help me out with one of my work projects--because kids always feel important when they think they're being super-helpful, don't they ;) And when I told my son (the 6 year old) that his paper would be on a blog on the internet (where You Tube lives), he was even more willing to help!! 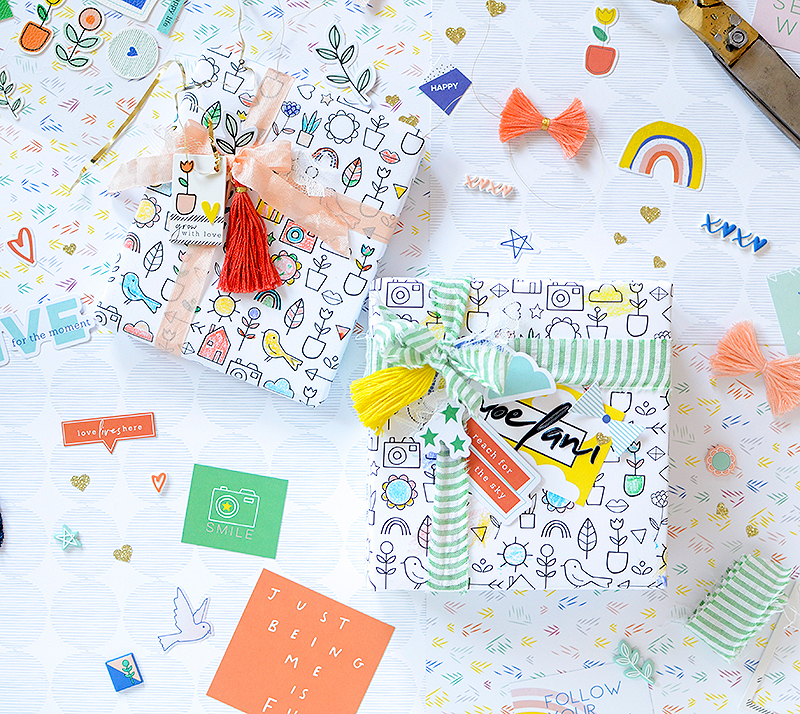 My 3 year old was "really focused" and mainly colored outside the lines; she's a free spirit and refuses to be contained.  My 6 year old colored lots of things in "rainbows" and got tired quickly; he's a dreamer and doesn't appreciate being "tied down" for too long.  When it was all said and done, I love their work and the way they expressed themselves.  I know my friend will love and appreciate it, too. 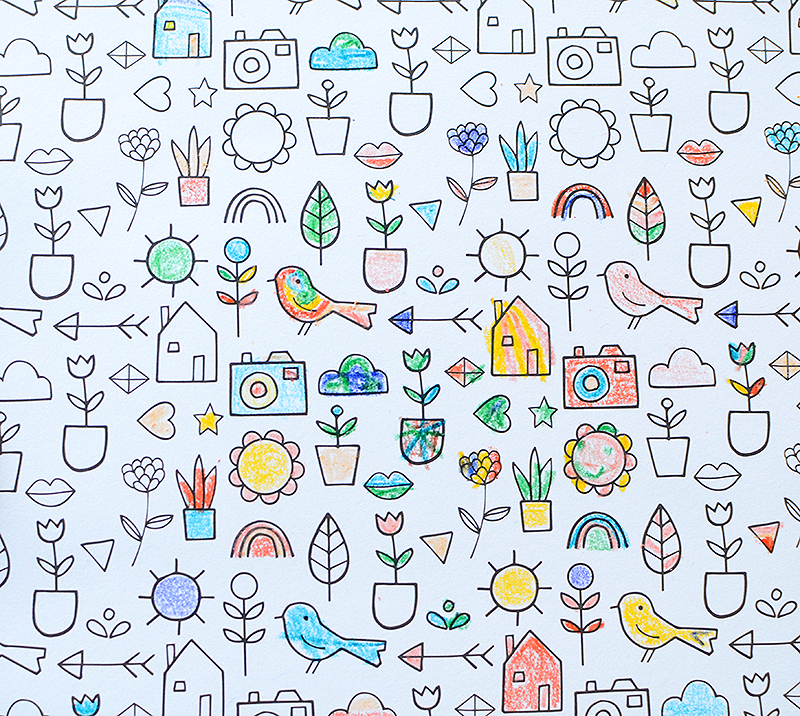 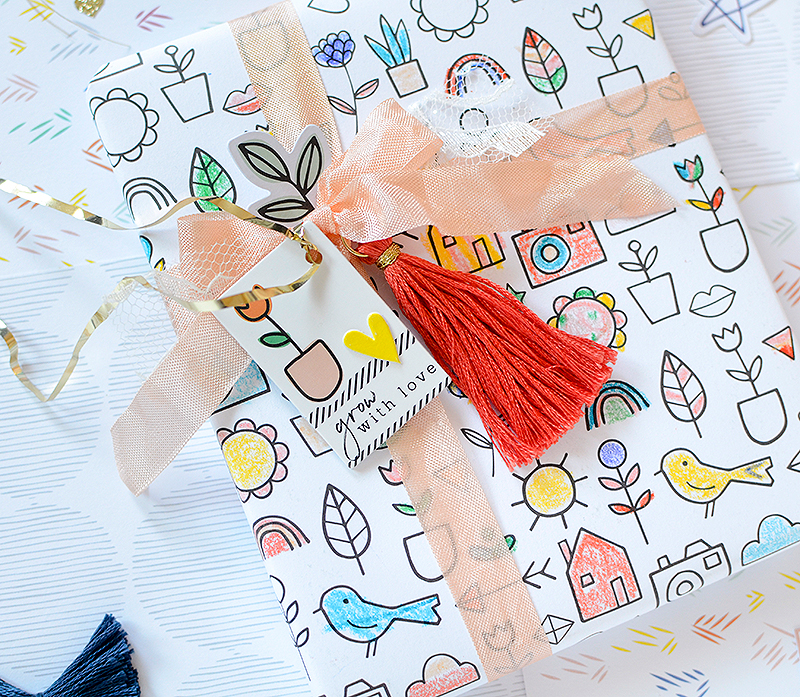 After wrapping up the books in their special paper, I added some trims--pale peach seam binding with an orange tassel and a swatch of lace.  It needed a tag so I used a layered chipboard sticker with the white backing still attached (I cut it out with an X-Acto knife).  I punched a hole in it and attached it with some gold tinsel.  The finishing piece was a die cut mint leaf. 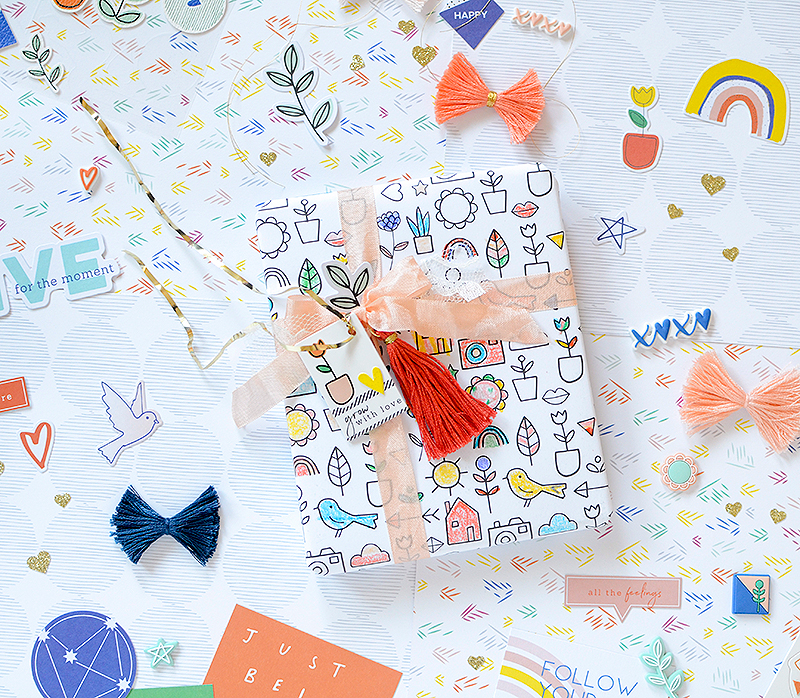 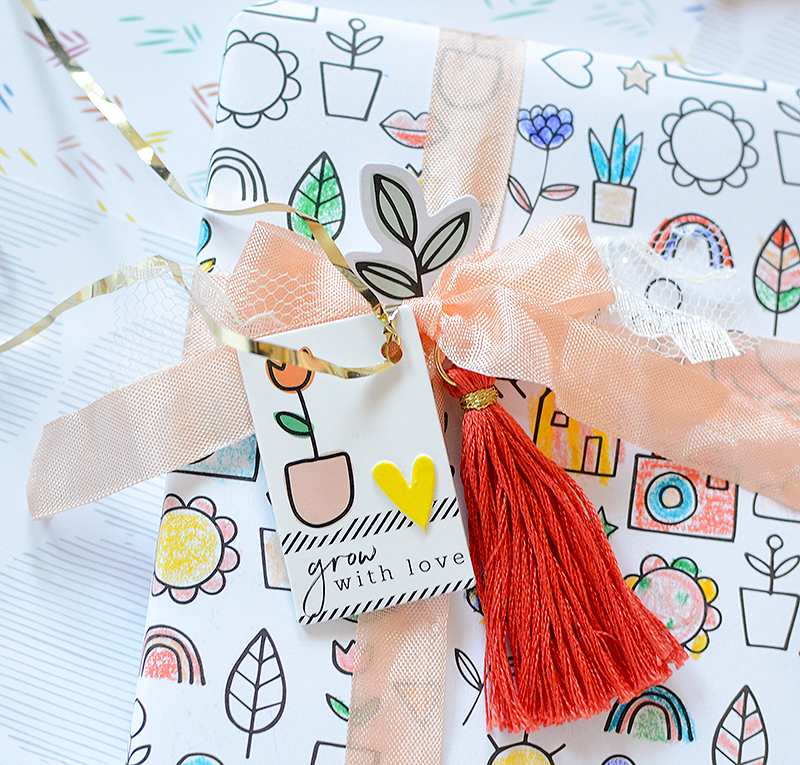 For the second package, I made a larger tag from a trimmed piece of 'Reverie' paper and used the puffy alpha stickers to spell the baby's name.  Instead of ribbon for this gift, I used a strip of white and green fabric, and chose a yellow tassel.  A few dreamy die cuts and the gift was complete. 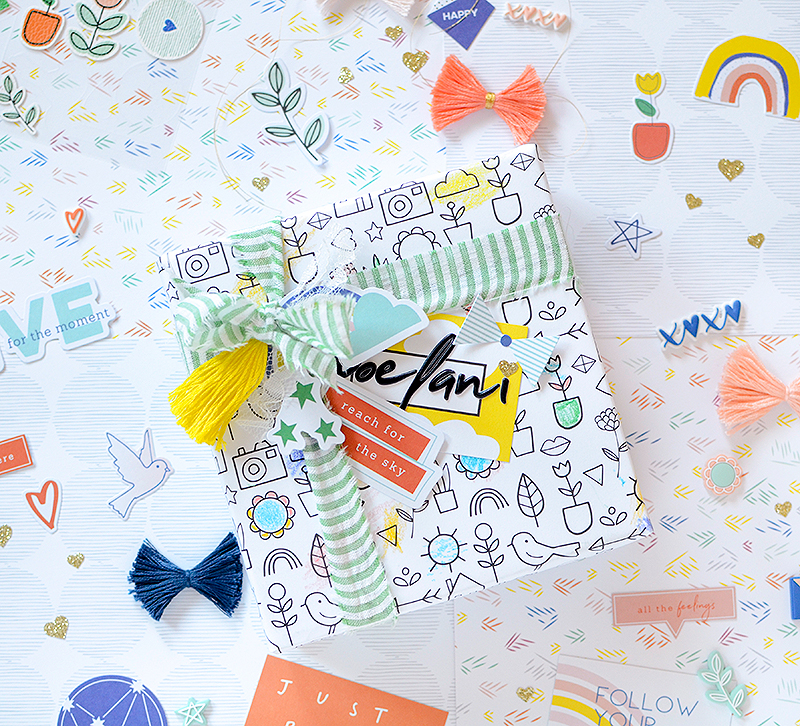 I'm smitten with how colorful the gifts are, thanks to the kids' creativity.  The paper alone, featuring cute images like birds, flowers, and rainbows, is just perfect for a child's present, too.  This was definitely a win-win: I've got some unique, homespun, and special gift wrap and my kids got to help create it! 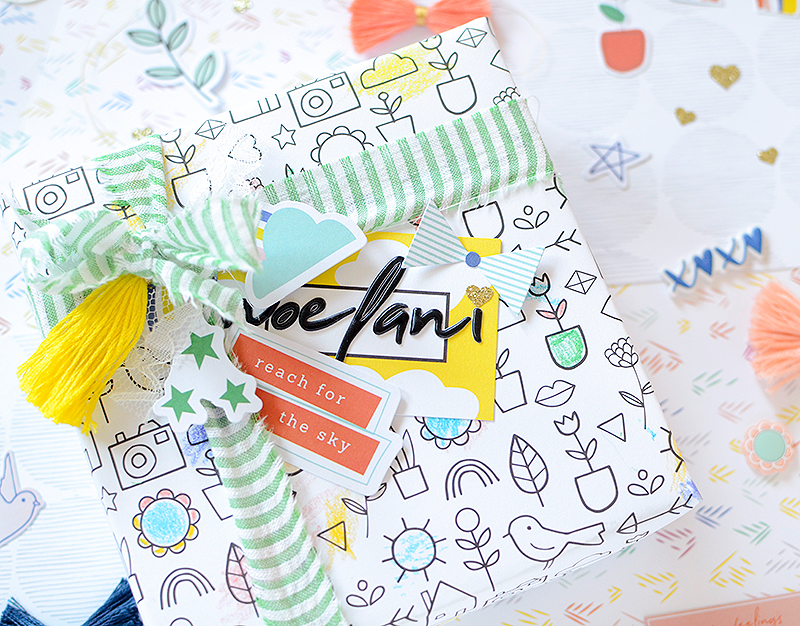 For my second project, I made a trio of cards.  I always draw on Pinkfresh's own use of white and minimal design elements when I make cards using their products.  The collections always feel so light and airy and when it comes time to create cards from them, I inevitably have visions of a white card base with lots of negative space! 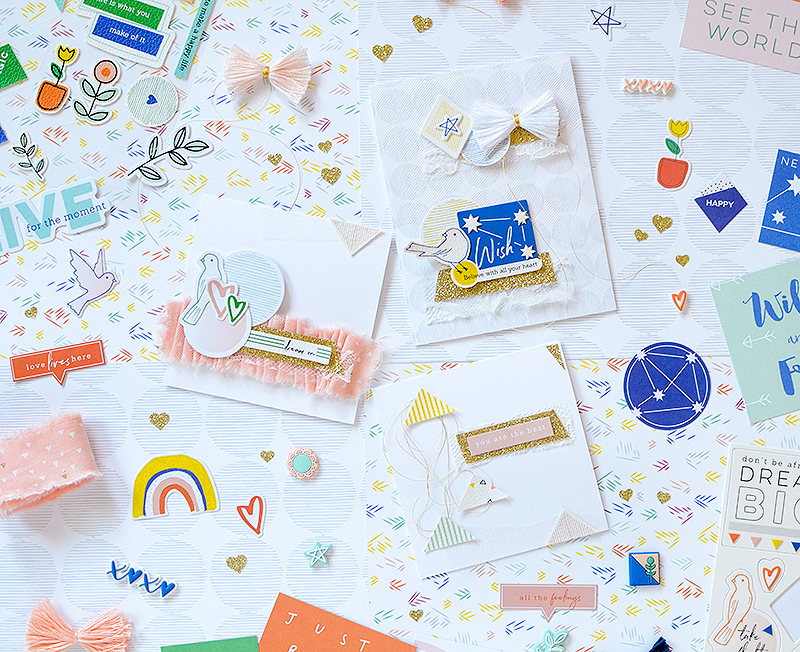 I still have to add texture, because that's an integral part of my personal style.  I've chosen pale pink tulle, peach fabric (gathered for extra depth), a bit of lace, a bit of glitter, and a couple of leatherette stickers from Dream On for the first card. Those stickers might be a personal favorite of mine from DO, simply because of that unexpected texture! 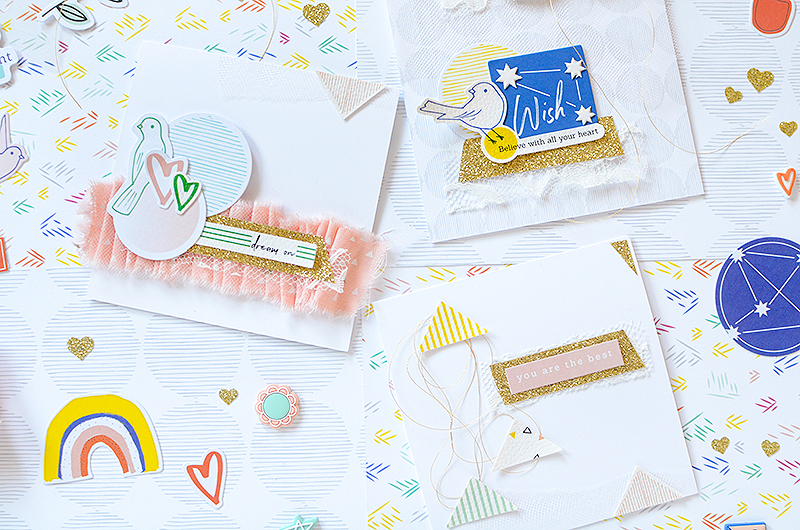 I clustered most of the elements together on the lower half of the 4x4 card.  It was good and done but after looking at it for a few minutes, I opted to add the triangle piece and a remnant of tulle at the top.  It worked without those things, too, but feels more complete and even balanced to me with those additions. 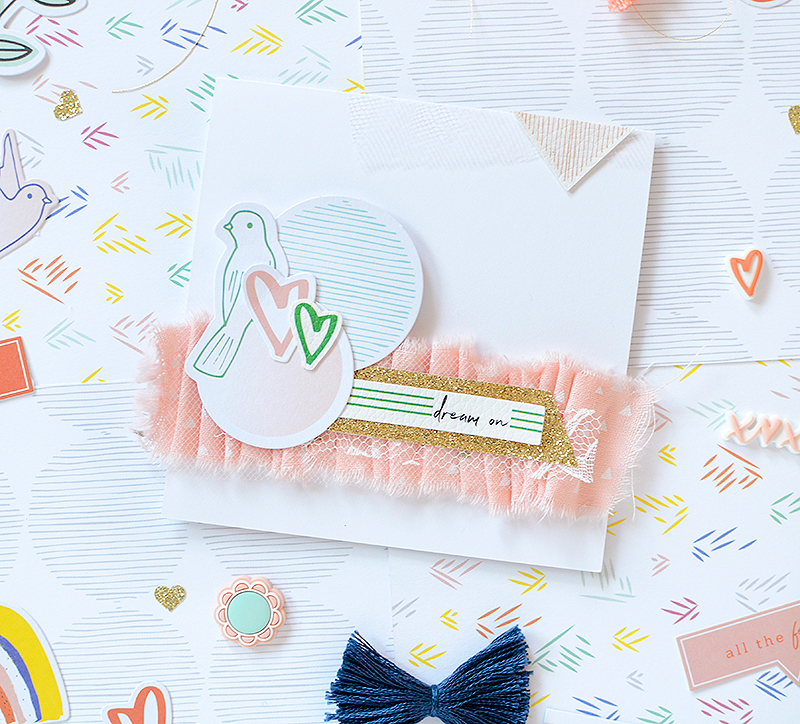 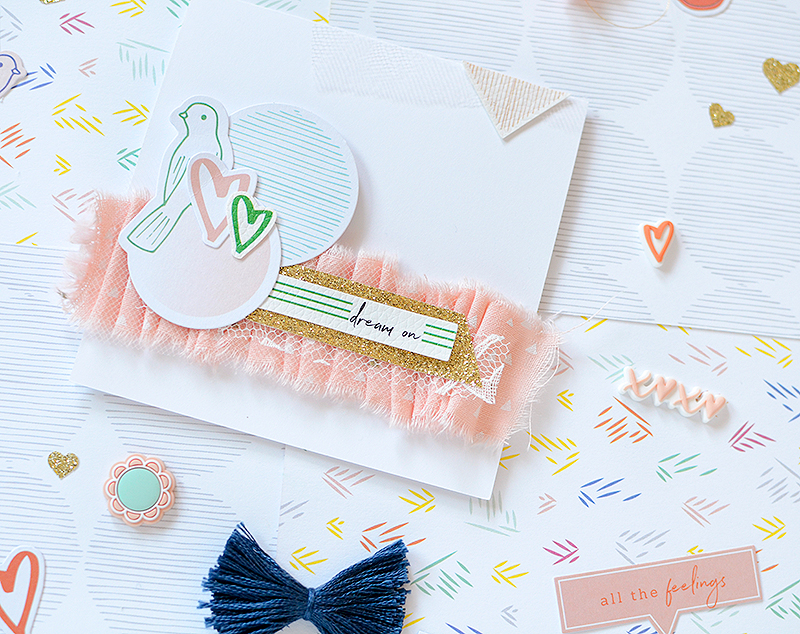 Next is a very simple card, with the leatherette stickers prominently featured once again.  I staggered 3 triangles down the left side, intertwined by gold thread.  My message (a sticker from The Mix line) is off to the right, and a triangle sticker and strip of tulle appear again, this time running across the bottom.  I created this card first, actually, so I nicked the idea for the other card from this one! 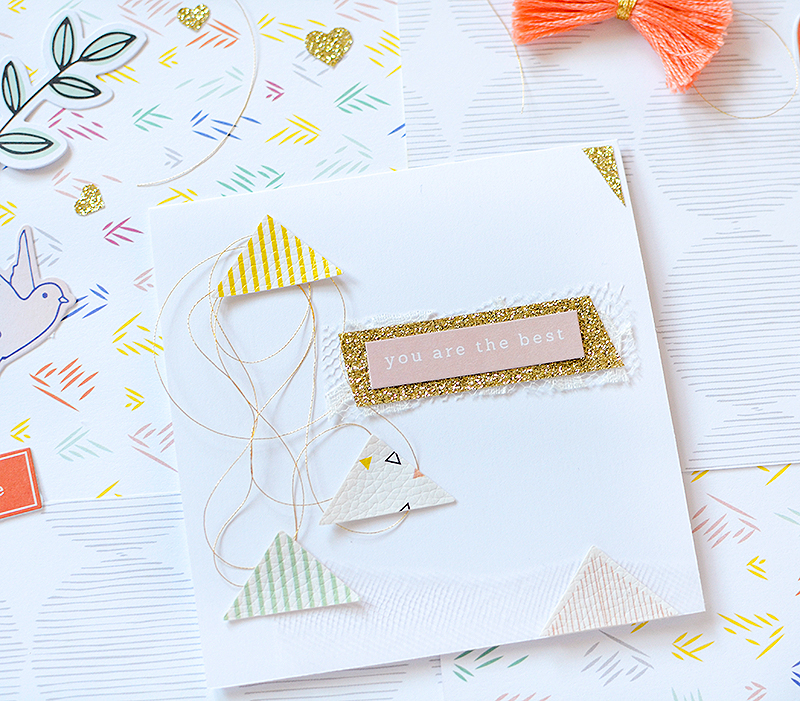 Again, I'm drawn to the dainty, minimal elements, and a healthy dose of flat, white space offset by the texture of every single element on the card.  The only other thing that is paper is the 'you are the best' sticker.  Using so many materials works here because they are used sparingly; a piece here, a scrap there. 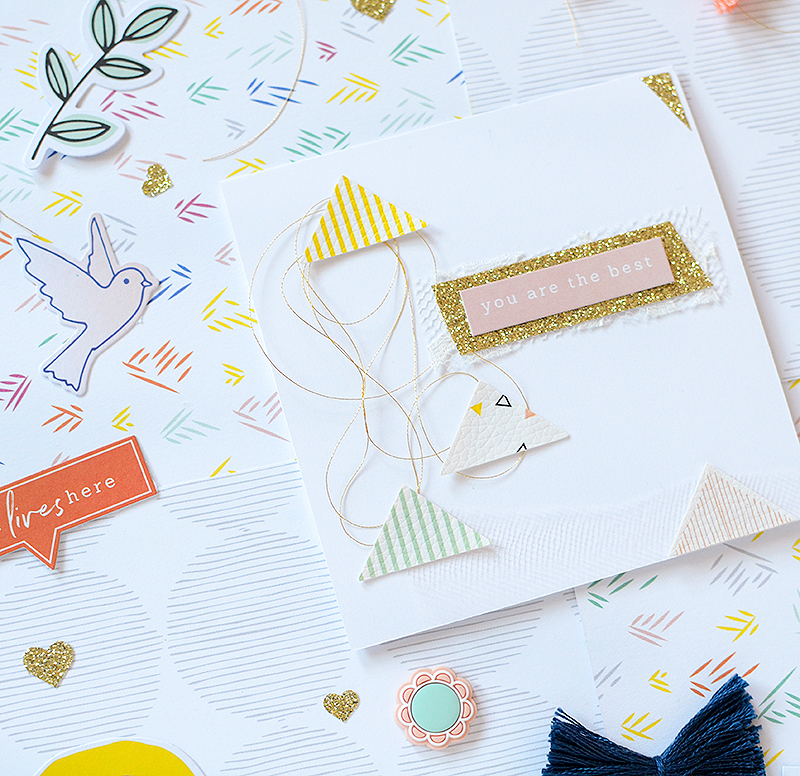 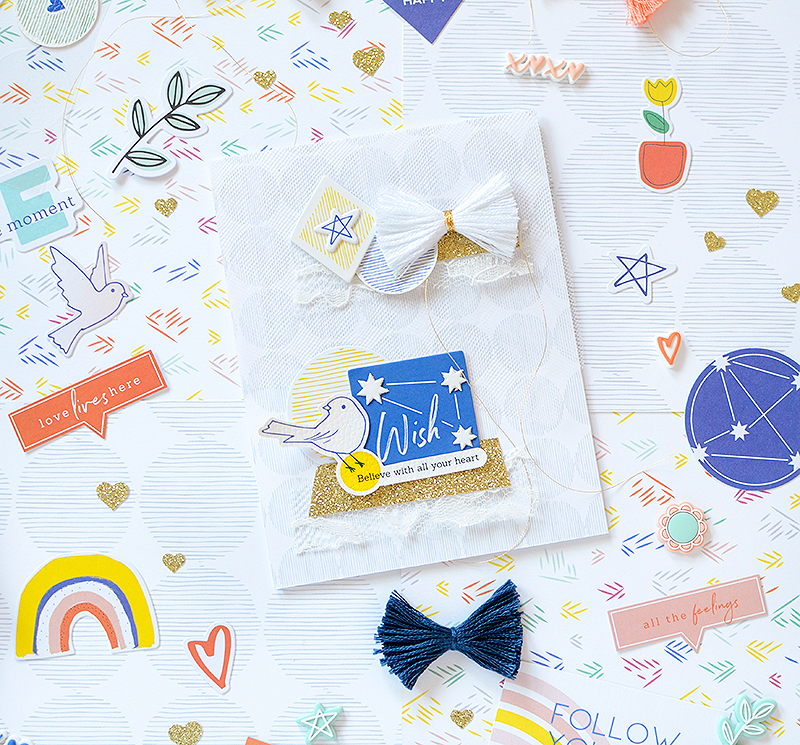 My last card is the busiest of the bunch.  I used a piece of patterned paper ('Wish') from the 6x6 paper pad as a backdrop for the yellow, blue, white and gold color scheme.  I covered the top half of the card with that pale pink tulle.  It's difficult to see in the photo, but if you look closely, you'll notice that it does add a variation on the lines in the circles of the patterned paper. 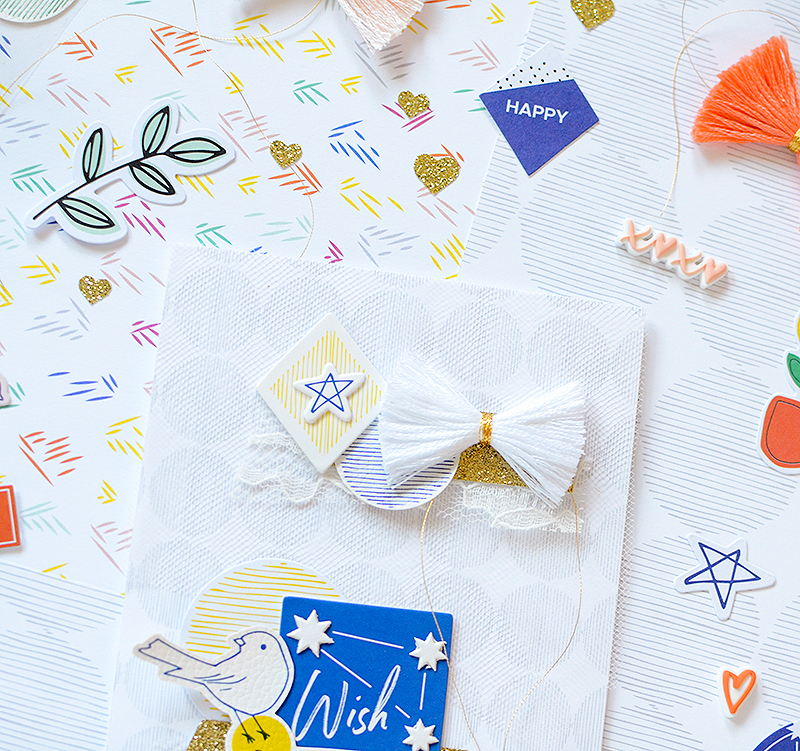 Here again, I reached for a couple leatherette stickers, but the scene stealer is the blue 'Wish' layered chipboard sticker.  My eye is drawn directly to it whenever I look at this card. 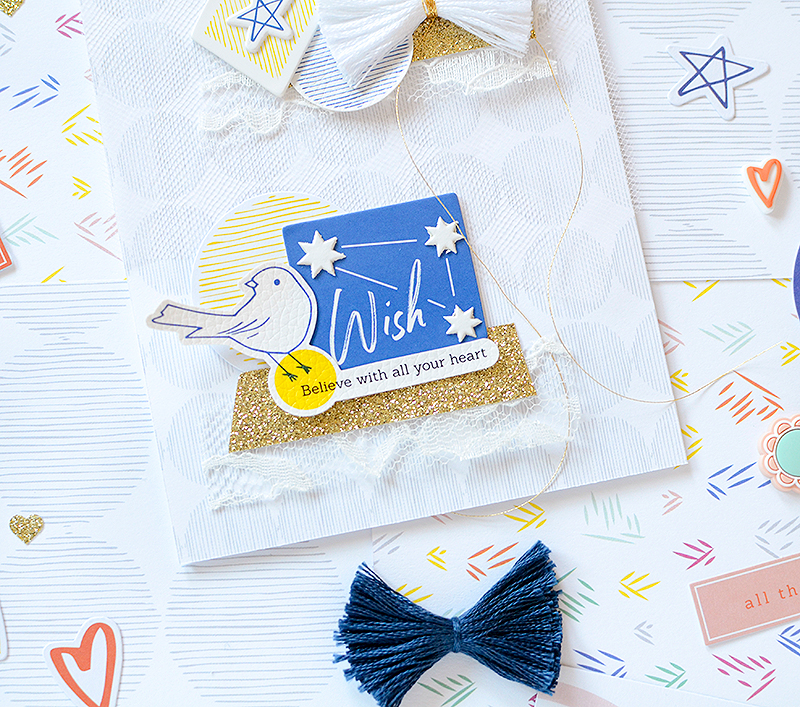 I know you can't wait to get your hands on Dream On--you won't be disappointed!  I hope you've been inspired today! xo 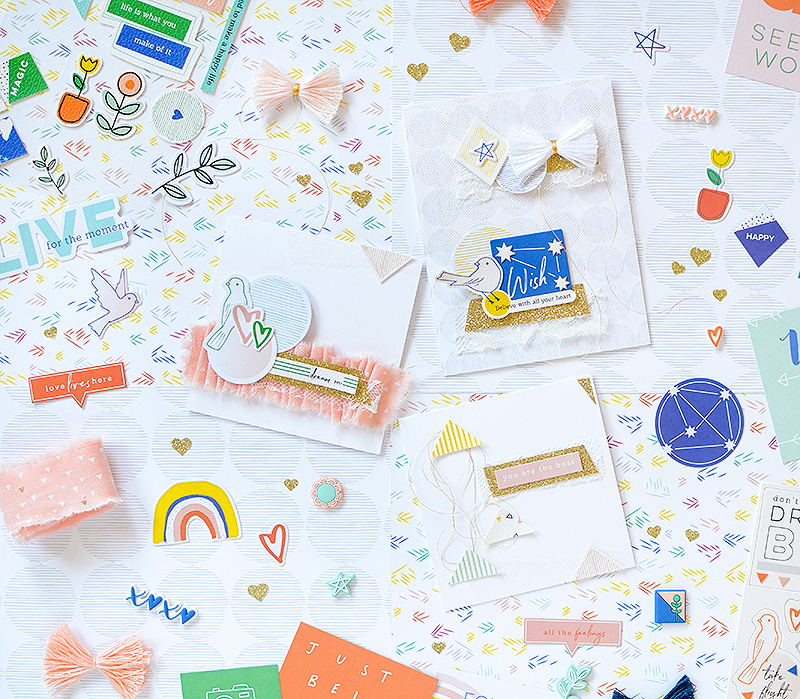 Wow your cards are so beautiful!!! And the gift wrap is also so sweet. Thanks for the inspiration ?

Gorgeous cards and that gift wrap is just the sweetest!!! LOVE it! Gorgeous creating!

love all of these projects! great stuff!